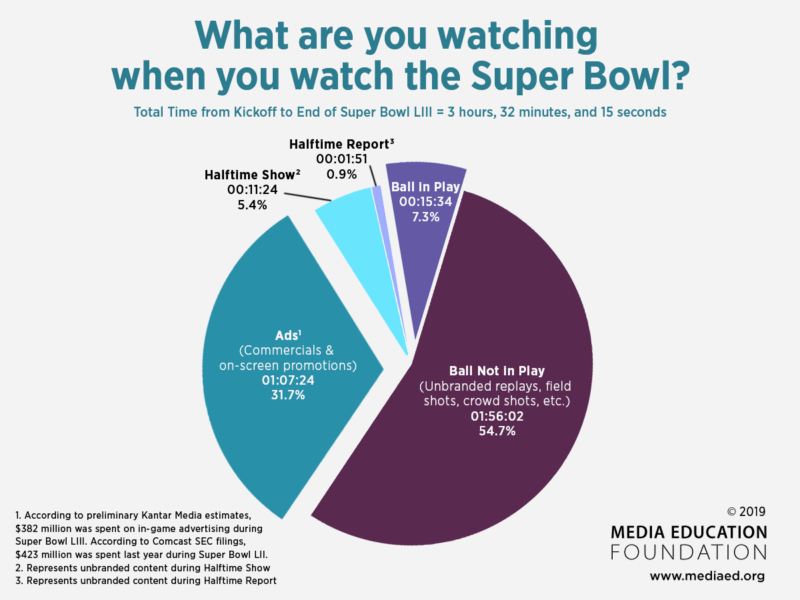 If you’re one of the roughly 100 million Americans expected to tune into the Super Bowl this Sunday, you can expect to spend a lot more time being sold stuff than actually seeing the ball in play.

As we’ve done annually for a few years now, the Media Education Foundation (MEF) crunched the numbers on last year’s Super Bowl broadcast and found that over the course of the three-and-a-half-hour game, the ball was in play for a mere 15 minutes and 34 seconds, or roughly 7% of the entire broadcast. In contrast, almost a full third of the broadcast – an hour and seven minutes in all – was dedicated to ads, branded content, and other commercial clutter. CBS, which charged upwards of $5.25 million for a 30-second spot, or roughly $175,000 per second, raked in more than $380 million from all of this in-game advertising.

According to MEF Executive Director Sut Jhally, what matters most about these numbers is how consistent they are with the overall commercialization of American culture.

“The Super Bowl is just one indicator of the growing power and presence of advertising in the U.S.,” Jhally said. “Corporations now spend over $200 billion a year on advertising, a massive amount of money that’s allowed them to claim more and more space in the culture and command more and more of our time and attention. The question we need to be asking is how all of this is affecting us as a culture.”

MEF has been producing videos for years on the multiple social, cultural, and political threats posed by hypercommercialism and unbridled consumer capitalism.

If you’re interested in exploring these issues with your students, we recommend three recent MEF titles in particular: Requiem for the American Dream, an award-winning documentary featuring Noam Chomsky that brilliantly exposes how the commercial interests of corporate elites are driving massive levels of income inequality and laying waste to basic democratic values; Advertising at the Edge of the Apocalypse, Sut Jhally’s devastating look at how commercialism and consumerism have undermined social relationships and put us on a collision course with environmental catastrophe; and Digital Disconnect, acclaimed media scholar Robert McChesney’s eye-opening analysis of the myriad threats to democracy posed by the corporate takeover of the internet and the rise of surveillance-based advertising.

REQUIEM FOR THE AMERICAN DREAM