Q&A with Jackson Katz on what’s been missing in media coverage of Trumpism, political violence, and the Capitol Insurrection 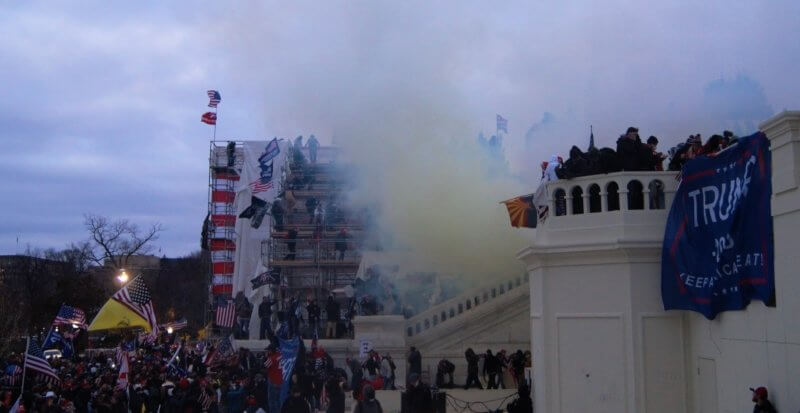 “Once you understand that a very large percentage of violence—interpersonal or political—is undergirded by retrograde beliefs about manhood that both encourage its use and make excuses for it after the fact, the urgent task is to make those beliefs themselves visible, dishonorable and unacceptable.”

But as political leaders and media commentators have struggled to make sense of what happened that day, and exhaustively mined it for clues about the forces fueling right-wing extremism, they have consistently overlooked a key piece of the equation.

“Political commentary about the causes of the Capitol Insurrection has rightly tended to focus on matters of race,” author and anti-violence educator Jackson Katz writes in a Ms. Magazine piece today. “But while it’s critically necessary to analyze the racial politics of January 6, this focus too often has the effect of rendering invisible another key aspect of that tragic event: the role of gender. The vast majority of insurrectionists were not only white people; they were white men.”

In the Q&A that follows, MEF production director Jeremy Earp talks to Jackson Katz about the January 6 insurrection, its relationship to the right’s longstanding appeals to white male resentment, and the U.S. news media’s striking blind spot when it comes to how deep-seated myths about manhood have shaped American presidential politics for decades. Katz is the creator and co-writer of the 2020 film The Man Card: White Male Identity Politics from Nixon to Trump, directed by award-winning filmmakers Peter Hutchison (Requiem for the American Dream) and Lucas Sabean.

JE: Over the past year, you’ve repeatedly made the case that January 6 can’t be fully understood without foregrounding white masculinity and the politics of white male grievance, resentment, and rage. Can you explain why you think manhood is so crucial here?

JK: In the spring of 2021, the University of Chicago did a study that examined the demographic breakdown of the people arrested and charged with crimes at the Capitol on January 6. One of its major findings was that 93% were white, and 86% were men. Racial grievance – and outright white supremacist belief – is obviously a huge underlying factor in the political rise of Donald Trump, the dangerous radicalization of the Republican Party, and now the growing militancy on the right. The racial politics of January 6 clearly needs to be analyzed and understood. But the fact that the vast majority of the white rioters were men is not an incidental fact. Trump’s strongest support by far in 2016 and 2020 came from white men. Trumpist populism is in many ways a white male identity movement. One year ago, that movement took a big step in the direction of violence. Since men commit the vast majority of violence – interpersonal and political – it’s impossible to talk about violence without talking about masculinity; it is impossible to talk about the insurrection without centering white masculinity.

JE: What does it tell you that so much of the mainstream media discussion about January 6 has seemed to focus on everything but white masculinity and these gender dynamics?

JK: It tells me that the commentariat in the corporate media and in much of left media – and I would include here many popular progressive podcasters that otherwise have a lot of valuable insights into the current American political crisis – have a huge blind spot when it comes to gender. Feminists have had to struggle with this blind spot across a range of issues for a half-century – in reality, forever.  It also shows you how deeply embedded patriarchal thinking is in the western mind and psyche, and the ways in which that hampers clear-eyed analysis. For example, countless media stories and conversations about the insurrection on television, radio, and podcasts use gender neutral language such as “people,” “individuals,” “extremists,” and “folks” to refer to the rioters. They barely ever use terms like “white masculinity” or reference the 86% statistic, much less discuss its significance. It’s as if the overwhelmingly male make-up of the violent mob is either seen as unremarkable, or so obvious and unexceptional as not to require further explanation. I can’t tell you how many times I have listened to smart people — men, women, and others – talk about contemporary politics, including the insurrection, with literally no mention of the gendered realities staring them in the face. We addressed this explicitly when we worked together on the original Tough Guise movie all the way back in 1999!

JE: Yes, and more than 20 years later, you helped produce the film The Man Card, which made these themes even more explicit and showed how deeply rooted they are in American political history.

JK: With The Man Card, we were trying to give educators, activists, and others a way to make sense of longstanding tensions and fissures in American political life, especially around intersections of race, class, and gender – a lot of the same tensions that in many ways boiled over on 1/6. A key turning point in modern American history happened when President Richard Nixon figured out how to appeal to white working-class men’s identities without giving them anything in terms of better wages, living conditions, health care, etc. He did it by appealing to their sense of racial anxiety and resentment in the post-civil rights era – that was his infamous “southern strategy.” But he also did it by offering white men cultural recognition, by applauding them as the people who built western civilization, and signaling to them that he and the GOP were on their side when it came to all of the gigantic transformations that were challenging white male centrality: the civil rights movement, feminism, the LGBTQ revolution, etc. Throughout the 1970s, and then accelerating in the 1980s under Ronald Reagan and fueled by an emboldened and politicized white evangelical movement, the GOP increasingly became the home of both white racial backlash and heteronormative white male backlash. Trump didn’t create this process, but with his constructed persona as the “blue collar billionaire,” his bullying language, open misogyny, and rhetorical celebrations of violence, he took it to another level.

JE: In mainstream media coverage, we hear again and again that January 6 was an “attack” on democracy by extremists hellbent on taking over the country by force. What’s fascinating is how this narrative gets flipped on its head in right wing media, where again and again we hear that pro-Trump conservatives are simply defending freedom and democracy from a full-blown attack by the radical left. What do you make of how this sense of victimhood infuses right-wing thinking?

JK: Throughout the 20th century, strongmen leaders and the fascist movements that coalesce around them have positioned themselves as defenders of the “people,” the “volk,” against the forces of “atheistic socialism,” “communism,” or “liberal decadence” of one sort or another. This is entirely predictable and part of the historical record. For a detailed discussion of this and related phenomenon, check out the historian Ruth Ben-Ghiat’s book entitled Strongmen: Mussolini to the Present. She shows how much Donald Trump has in common with other strongmen leaders going back to the early 20th century, and how much Trumpism has in common with the morally bankrupt and disastrous movements they catalyzed. Right-wing movements almost always frame themselves as the victims of social movements that are dedicated to advancing democratic freedoms. This has the added value – to them – of rationalizing the violence they use to gain or maintain power. Some of this is just utterly predictable, and avoidable! But media needs to provide this level of analysis, teachers and professors need to teach it, podcasters need to discuss it, etc. But when it comes to talking openly and honestly about the ways in which Trumpism is about threats to the cultural centrality of white masculinity, it’s largely crickets.

JE: Many commentators in mainstream media, as well as many liberals, progressives, and even some conservatives, believe it’s important to hold the people responsible for the January 6 insurrection accountable. What’s your take on how the system should respond to this event?

JK: I believe in the possibility of redemption, but I also believe strongly that there needs to be accountability, as far up the chain as prosecutors can go. A violent assault on the symbolic and actual seat of American democracy is an enormously serious matter. Would-be domestic terrorists need to know that there will be a significant cost to pay if they don’t respect the rule of law and choose to use violence to get their way. I’m also hoping the congressional committee investigating the insurrection does a good job of planning and staging the televised hearings. In particular, I think it would be greatly helpful to hear from some of the white men who stormed the Capitol, broke windows and other things, and assaulted Capitol police because they thought they were doing what their leader – the president of the United States – wanted them to do. I’m especially hopeful that the committee will get some of those men to say they were misled and vulnerable to that sort of pressure for a variety of reasons. I’ve been saying for years that we need a national conversation about “manhood.” Now even some on the right, like Josh Hawley, are saying that, too. Obviously, I vehemently disagree with Hawley and others both on the source of the problems and potential solutions. But I would love it if the hearings on the insurrection – which will likely have a huge national audience – could at least open up space to talk about the complex stew of anxiety, confusion, and anger so many white men are feeling these days. The idea is to pull some of these men back from the dark side by giving them a way to think about themselves and their place in this changing society that is constructive, valued, and non-violent.

JE: And yet isn’t it the case that a lot of people on the left recoil from discussions that position men, especially white men, as victims who might have legitimate grievances?

JK: Yes. And, in addition to lacking empathy, I think it’s both shortsighted and self-defeating. The health and wellness statistics don’t lie – millions of men, including white men, are struggling badly. Physical and mental health challenges, drug and alcohol problems, relational struggles, loneliness. It does not diminish the aspirations of women or people of color to acknowledge this. I’m not saying I would participate in a false equivalence narrative along the lines of “men are victims, too,” although in some instances that is true. For example, I am currently writing a “big picture” book about gender and violence, and as I have been saying in speeches for decades, outside of domestic and sexual violence, men are the primary victims of most forms of violence – as well as its primary perpetrators. But here’s the self-defeating part. Since Nov. 9, 2016, I have been saying this to any liberals or progressives who want to blithely dismiss the concerns of white men: Okay, go ahead and write off white men. But I have three words for you: “President Donald Trump.”

Click here for more information about The Man Card: White Male Identity Politics from Nixon to Trump, which is now available to stream through universities and public libraries on the Kanopy streaming platform, via streaming rental, and on DVD. Click here to see if your university subscribes to Kanopy.

Also be sure to check out Hutchison’s award-winning film Healing from Hate: Battle for the Soul of a Nation, which is also streaming on Kanopy and available on DVD.