Fifteen years after Columbine, are we still asking the wrong questions?

On April 20, 1999, high school seniors Eric Harris and Dylan Klebold walked into the cafeteria and library at Columbine High School in Littleton, Colorado, and opened fire, killing 12 of their classmates and a teacher, and wounding dozens of others, before taking their own lives. The rampage shocked the nation and sparked a fierce national debate about gun control laws, youth violence, bullying, school security, and violent video games.

But 15 years and scores of mass killings later, the national conversation about rampage killings seems to be stuck at an impasse – fixated almost exclusively on the issues of guns and mental illness.

The result has been virtually no sustained analysis of the most glaring variable of all: the stunning fact that the overwhelming majority of rampage killings – including 99% of school shootings and 67 of the last 68 mass shootings overall – have been committed by men and boys.

To mark the anniversary of the Columbine tragedy, we interviewed renowned cultural theorist and anti-violence educator Jackson Katz about the acceleration of mass killings by men and boys over the past decade – from the Virginia Tech and Newtown massacres to the Boston Marathon bombing and the most recent mass shooting at Fort Hood.

In his violence prevention work with schools, professional sports teams, and the U.S. military, Katz focuses explicitly on the relationship between violence and cultural ideas about manhood.

“You can’t deal with a problem until you name it,” Katz says in the interview. “Imagine if 67 out of 68 of the last mass shootings were done by women and girls: would anyone be talking about guns and mental illness as the first line of explanation? Unless and until we start focusing on how our ideas about manhood are implicated in men’s violence, we’re just going to keep lurching from one tragedy to the next with little understanding of what’s really happening or how we can break this destructive pattern.” 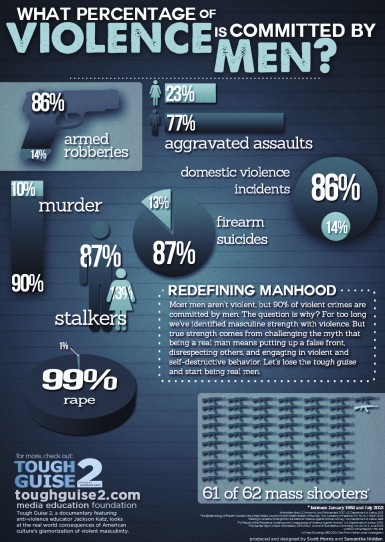 In addition to his ground-level work in the field, Katz is the co-creator of MEF’s critically acclaimed new documentary Tough Guise 2: Violence, Masculinity & American Culture, which examines the epidemic of male violence in America – from school shootings to bullying to sexual assault – against the backdrop of a culture that has normalized, and glamorized, violent masculinity.

MEF has just released two new abridged versions of Tough Guise 2 – a 52-minute version shortened to show during an average class period, and a 46-minute “clean” version edited especially for use with younger audiences.

Click here to watch a clip from Tough Guise 2 about masculinity and mass shootings.

Download this infographic showing the disproportionate percentages of mass shootings and other violent crimes committed by men.