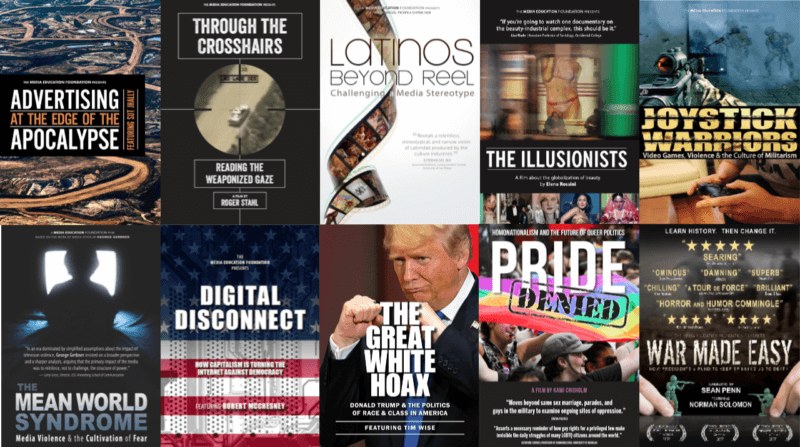 If you’re looking for videos to help students think critically about how our media and communications systems shape our understanding of urgent social and political issues, please don’t forget these popular MEF titles. Whether the focus is advertising culture, the digital revolution, or political propaganda, these videos pay special attention to the political economy of American mass media and the myriad ways corporate interests combine with state power to shape the kinds of information we receive.

Do you already use MEF videos in your classes? Please share your syllabus with us!

“Why has our society failed to address climate change, which now in the 21st century calls into question the very survival of humanity? [This video] provides a compelling answer, one that few so far have been willing to contemplate: the nature of our advertising and marketing system, a ‘magic kingdom’ which today has come to dominate human consciousness from cradle to grave.”

“There is no educational goal more imperative than helping students understand the power and reach of the digital revolution, and there is no one better able to guide us through these lessons than Robert McChesney. Digital Disconnect combines McChesney’s terrific explanatory skills with MEF’s wonderful production values and creativity, providing a one-stop ‘zero-to-60’ education in the most important topic of our times.”

THE GREAT WHITE HOAX
Donald Trump and the Politics of Race and Class in America
“Identity politics? No, identity is politics. This is why The Great White Hoax can trace a historical line from the colonial period to Trump’s 2016 victory which stoked a conservative white identity politics fueled by economic, racial, and cultural anxiety over the Other. Tim Wise explains how it happened by linking the hard evidence of politicians’ and voters’ statements with the nation’s history and recent social transformations.”

THE ILLUSIONISTS
A Film About the Globalization of Beauty

“With unsettling visuals, damning examples, and interviews with the leading experts, The Illusionists reveals the capitalist impulses behind the intimidatingly high standard of beauty in the West and shows how corporations are bringing men, children, and the entire world into its destructive fold. If you’re going to watch one documentary on the beauty-industrial complex, this should be it.”

“A brilliant, mesmerizing analysis of how official, state-sponsored weapon-cam footage has invaded U.S. news and entertainment media and shaped the way we see and experience war. An invaluable resource for helping students understand how the military-industrial complex has used drone footage to weaponize mass media and glamorize America’s endless wars.”

“Illuminates the historical and contemporary invisibility and misrepresentation of Latinos in news and entertainment media and helps viewers understand how and why this distorted picture has come about. Particularly given that one in four American children is now Latino, this is a vitally important educational documentary.”

– Mary Beltrán, Ph.D., Author of Latina/o Stars in U.S. Eyes: The Making and Meanings of Film

THE MEAN WORLD SYNDROME
Media Violence and the Cultivation of Fear

“A superb update of MEF’s earlier films with George Gerbner. [It] effectively places cultivation analysis into the context of earlier media effects research, addresses television’s contribution to our perceptions of race, and emphasizes the crucial political implications of Gerbner’s ideas. The Mean World Syndrome is powerful and emotionally moving and I will be using it in my courses.”

PRIDE DENIED
Homonationalism and the Future of Queer Politics

“Asserts a necessary reminder of the intersections among gender, sexual, racial, economic, and regional inequalities and how gay rights for a privileged few make invisible once again the daily struggles of many GLBTQ citizens around the world. Likely to provoke lively debates at screenings and in classrooms, the documentary offers tools to begin a conversation about the work still to do in achieving true social equality.”

“Combines incredible insightfulness with accessibility. Even as someone who devotes my career to studying the normalization of violence and the gendered dynamics of that normalization, I found this video strikingly original and deeply engaging.”

– Laura Sjoberg | Author of Gender, Justice, and the Wars in Iraq

WAR MADE EASY
How Presidents & Pundits Keep Spinning Us to Death
“A superb visual form of investigative journalism. It chillingly exposes government officials who have used deception to send our young men and women into the hell of war, and who have condemned innocent families in the Middle East to death. But more, it investigates journalism itself, documenting the collusion of the national media with the warmakers, and thus alerting us to the betrayal of democracy.”

– Howard Zinn | Author, A People’s History of the United States