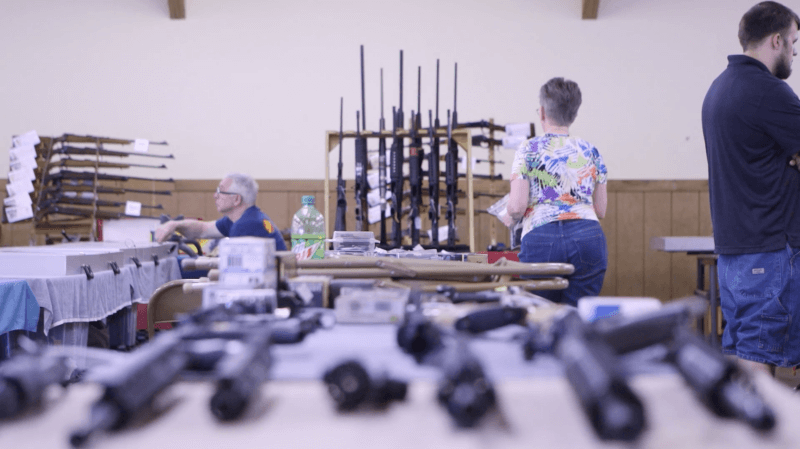 Still from Gun Show: Rethinking Weapons in the Name of Art

“This remarkable documentary illuminates the chasm we must cross to make headway in the American gun debate.”
— Firmin DeBrabander, Author of Do Guns Make Us Free?

Polls show that huge numbers of gun owners in the U.S. now support new restrictions on firearms. But despite being crucial to turning the tide in debates surrounding gun laws, their voices are not being heard.

And researchers at Tufts University think they know why.

“Our study found that the overwhelming majority of gun owners support basic laws that aim to keep guns out of the hands of people who are at high risk for violence, but they’re afraid to speak out publicly,” Dr. Michael Siegel, a public health researcher at Tufts who’s surveyed thousands of gun owners, said in an interview on NPR last week.¹ “They reject the gun lobby’s positions. But when they look at the other side, they’re also leery of gun control advocates who say things like, get rid of all guns. Or they don’t want to be seen as part of the problem just because they own a firearm.”

One way to finally make serious headway in the fight for stricter gun laws, Siegel says, is to give this “silent majority” of reform-minded gun owners a voice and stop casting them in the same light as right-wing, Second-Amendment extremists and mass murderers simply because they own guns.

“It alienates them because they feel like they’re being blamed,” Siegel said, noting that fully one third of U.S. adults now own a gun. “We really need gun owners to be part of the solution. And to do that, we have to respect gun culture. We have to respect the fact that they have a legitimate reason for owning a gun. We don’t have to agree with it, but we have to respect it. When gun owners are willing to come out and express their support for these laws, that’s when things will really start to change.”

Agree or disagree, if you’re an educator looking for resources to help foster dialogue and move the needle on the gun debate, be sure to check out Richard Chisolm’s thoughtful, nuanced, and deceptively powerful documentary Gun Show: Rethinking Weapons in the Name of Art.

Gun Show tells the story of David Hess, a sculptor who assembles mock assault weapons out of everyday found objects and exhibits them across the country to encourage people to take a step back, question, and think critically about the normalization of American gun culture. The film has been earning high praise for raising awareness about the unacceptable scourge of gun violence in a way that bridges differences across personal, political, and cultural divides.

Gun Show is now available to watch through your university or public library via the Kanopy streaming platform. Click here to see if your university subscribes to Kanopy. You can also purchase a DVD, get a 7-day streaming rental, or host a virtual or in-person public screening of the film.

“After every new and senseless mass shooting, there is a flickering hope that common sense legislation will prevail, and then it does not. Enter Gun Show, a fresh-faced film that wields the achingly inventive art of David Hess, who has literally created ‘weapons of mass discussion!’ Richard Chisolm’s documentary trumpets a great human aspiration – the end of us-versus-them thinking – revealing a world where we see we are all in it together.”

“Guns are tools, totems of pride and patriotism, cherished family heirlooms, sources of terror, symbols of power and resistance, and everything in between. Gun Show reveals how a shared artistic experience opens up conversations that transcend the typical divides marking the debates over gun violence and gun rights in the US.”

— Jonathan Obert | Assistant Professor of Political Science at Amherst College and author of The Six-Shooter State: Public and Private Violence in American Politics

— Firmin DeBrabander | Author of Do Guns Make Us Free? and Professor of Philosophy at the Maryland Institute College of Art

“A provocative, and productively uncomfortable, look at art’s capacity to transform, and to breach the barriers that prevent us from connecting across our differences. Amidst our increasingly heated gun debates, art provides a means of recapturing a sense of shared humanity and common vulnerability.”

— Caroline Light | Author of Stand Your Ground: A History of America’s Love Affair with Lethal Self-Defense and Senior Lecturer and Director of Undergraduate Studies Program in Women, Gender, and Sexuality Studies at Harvard University

“9 out of 10! Whether it’s rural farmers seeing the weapons as optimistic homages to freedom, community programs for at-risk youth viewing them as a fetishistic love letter to romanticized violence, or an ethical debate with no right answer (or end), Gun Show succeeds in almost every way.”