A harrowing reminder that NFL players are human 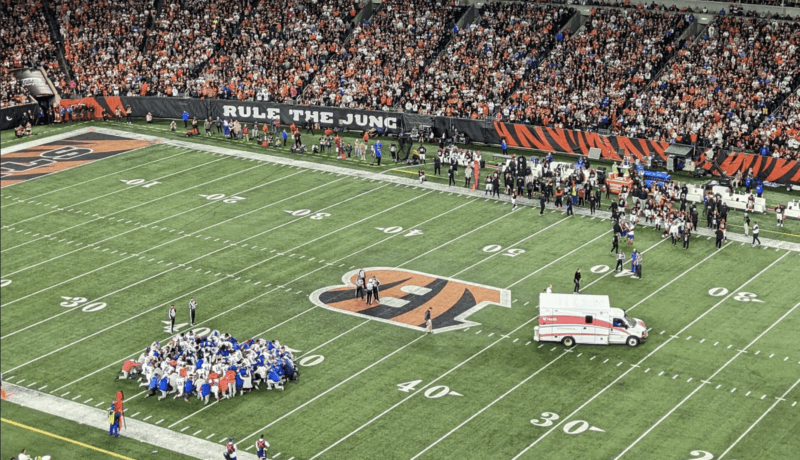 “Damar Hamlin Incident” by Schetm is licensed under CC0.

When NFL player Damar Hamlin collapsed on the field in cardiac arrest after a blow to the chest during Monday night’s football game, two radically different sides of America’s most popular sport came into sharp focus: the basic humanity of NFL players, and the league’s longstanding, profit-driven denial of this humanity.

Hamlin was carried out on a stretcher motionless. Network cameras captured traumatized players on both teams crying and comforting each other in a heartbreaking display of empathy and vulnerability. Then shock turned to national outrage when ESPN broadcasters announced that league officials had given players five minutes to warm up and continue the game, only relenting an hour later when coaches and players refused.

“The callousness of this league never ceases to shock,” Dave Zirin wrote in The Nation. “Players are treated like equipment – easily found, easily disposed of. The valorized phrase ‘next man up’ is really saying that when your co-worker is disabled, it’s your turn in the thresher.”

Zirin takes a sustained look at the motivations that drive the NFL’s “next man up” mentality in our new film Behind the Shield. In this excerpt from the film below, he traces how the league has built its brand over a period of decades on a set of dehumanizing myths and lies about male invulnerability and blasts the right for minimizing player safety for political gain. You can get the full film here.